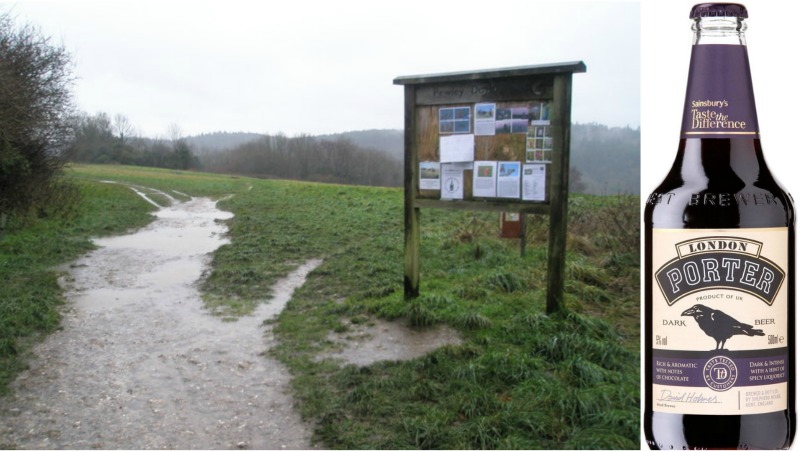 (I broke my camera, so had to filch the above photo. It’s copyrighted to Basher Eyre and licensed for reuse).

Back in the neighbourhood, Ollys, the fish & chips place on Norwood Road, has a range of gluten free beers. On a recent visit, I had a bottle of British Bulldog best bitter. It had a thick head, was pleasantly bitter and a proper, beery smell. This old-fashioned beer went fine with my haddock and chips.

Autumn evenings call for these thicker, richer beers and Sainsbury’s Taste the Difference London Porter was sufficiently chocolaty and satisfying. Add to that, it’s got a raven on the label and I’m sold. Next time I’m pondering weak and weary in the supermarket, I’ll pick up another bottle.

The London Porter is brewed by Shepherd Neame Brewery in Faversham in Kent, which is not too far off being local. As well as the porter, it supplies a Kentish Ale to Sainsbury's Taste the Difference range. It is a lighter and brighter but still flavoursome ale and well worth a punt. I do have a soft spot for regional breweries like Shepherd Neame, Harveys down in Lewes and Adnams in Southwold.

As well as being a sucker for ravens and regional brewers, I also find it hard to resist a beer marketed as Table Beer. The plain, brown paper label works too. Luckily, the beer is pretty tasty, so I’m not just getting a nice name and label for my money. The brewer is Kernel in Bermondsey and I bought it from Dugard & Daughters on Milkwood Road, Herne Hill.

A couple of weeks ago, I had a pint of Doom Bar in the Hand in Hand in Brixton, up near the South Circular. Doom Bar is one of those safe beers; easy drinking, a bit short on flavour and nothing to make it stand out from the crowd. One to drink when nothing else appeals.

More recently, I had a night out in Soho. We started in the Spice of Life (a favourite, punkish pub back in the day). This was a heaving Friday night and tap seemed safer than pump, so we went for Blue Moon. Now, it tasted ok but bloated like a draught lager and a second pint was out of the question. We moved onto Soho institution, the Nellie Dean for a pint of Dartmoor Jail Ale. This ought to be good, solid beer but this time it wasn’t. The plastic glass didn’t help but its contents failed to rise above nondescript. Our destination was the 100 Club on Oxford Street and here Camden Pale provided a safe and reliable haven.