Banksy’s shop in Croydon, Gross Domestic Product about to close (though never opened)

Today is the last opportunity that Banksy lovers will have to bid for items in his shop at incredibly low prices. The lucky-dip of artworks and other memorabilia include a stab vest, t-shirts, a mock-tiger rug, and even genuine artwork.

A million pounds through the shredder 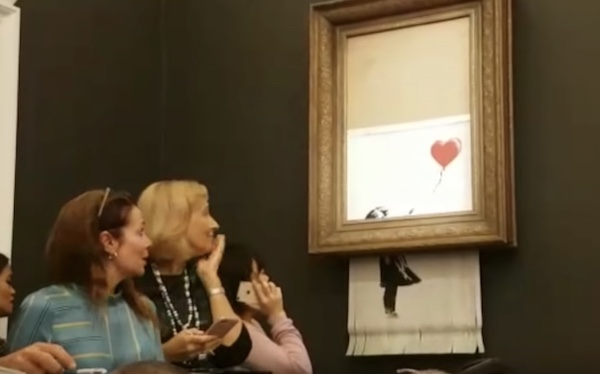 About 10 years ago I watched as my friend paid around £10,000 for a Banksy original signed print for sale in a gallery exhibiting at the London Art Fair. My eyes nearly watered as he nonchalantly paid over the money. As it turns out, this was a very good business move on his part as the work now has more than doubled in value.

Banksy’s fame has spread worldwide and the mystery surrounding his true identity feeds the myth of who this great artist can be.

Other stunts by Banksy include setting up a hotel on the West Bank in Palestine, as well as selling a piece at Sotheby’s that had a shredder built into the frame. The winner of the auction watched in horror as the artwork was literally shredded at the very moment the hammer went down.

Many say it is an insult to monkeys to compare our politicians to them and given the current crop of non-talent in the halls of British power, who could disagree. That said, Banksy’s poignant work ‘Devolution of Parliament’ perfectly captures the public mood when it comes to issues of the day.

This brilliant work went under the hammer at Sotheby’s recently for £9million. This is further evidence of the growing admiration for the artist's ability to capture the spirits of our times. Prints of this work are also being sold by London dealer, Tanya Baxter Contemporary based on the King’s Road in London.

A piece of our time

Capturing time is truly a conceptual endeavour and one that artists and writers are properly adept to achieve. Banksy is one of these oddities in time who seems to effortlessly mock the stupidity that rife in the age in which we exist.

If one of his street pieces appears in our city then the feeling is that it is a welcome addition. Banksy’s enthronement in the more complex market of art is intriguing and a bit of a paradox. However, it is inevitable, and as the artist might say himself, utterly deplorable.

It might be worth signing up on his site to try and grab a piece of this prolific artist.