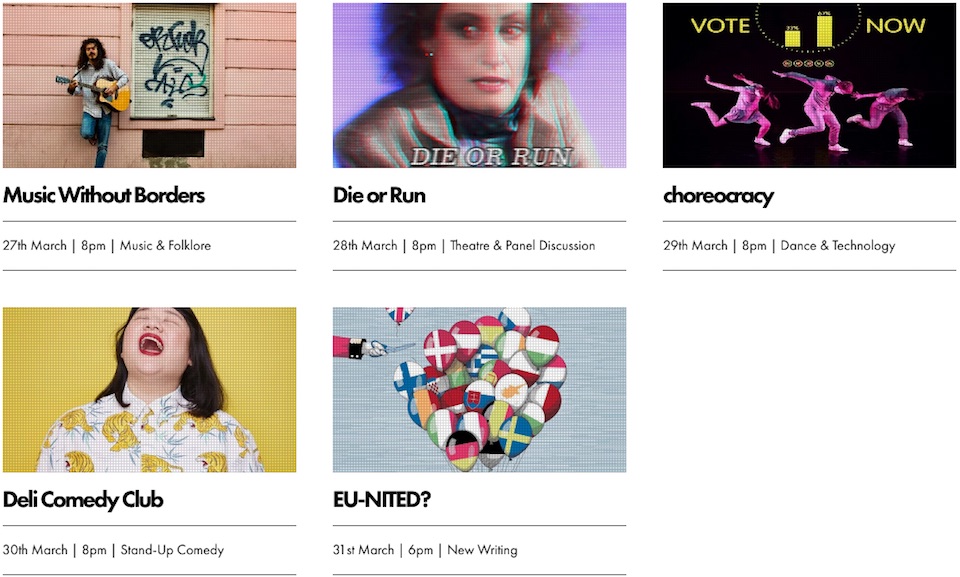 Brexit has divided many in the country but there is one thing we all share in common on the subject: we all want a better a brighter future for Britain. The devil is just in the detail of how we get there. One thing many Europeans respect British people for is our sense of pragmatism and sense of fair-play.

No matter who is right or wrong on the Brexit issue, we do now need to face up to the practical issues that are arising from where we are.  One of these issues is how we collaborate with our longstanding partners who come from Europe. There is no doubt that the collaboration of British and European artists and creatives has contributed to the UK being one of the most dynamic cultural centres in the world.

Responding to the challenges currently raised by potential Brexit outcomes, Theatre Deli have announced a festival of work celebrating European artists contribution to the UK’s cultural landscape, in addition to new theatre, dance and technology shows that will question the power of democracy and politics. Theatre Deli have taken a stance against art being limited by borders and believe that cultural isolation should be avoided at all costs.

The festival will see a headline performance of Die Or Run by SHUNT co-founder Hannah Ringham and Glen Neath (co-creator of the acclaimed immersive shows Seance and Flight). Die or Run will interrogate the idea that mental health across society is influenced by political ideology and the policy that flows from it. The piece was prompted by an interview with Margaret Thatcher in which she stated: ‘There is no such thing as society.'

Joining them will be record-breaking dance artist, Tim Casson, and BAFTA award-winning digital artist Seb Lee-Delisle, with their show choreocracy , an interactive dance show that puts the audience in control of the performance. choreocracy explores whether a performance can be truly democratic & the outcome of leaving the fate of a performance up to the audience.

After two sell-out nights in 2019, Deli Comedy Club is back on 30th March with a line-up of European comedians ready to knock your socks off, featuring both upcoming and established, award-winning comedians.

This affects us all

Theatre Deli’s Producer & Programmer, Emma Blackman said, “Whether you voted leave or remain, the Brexit weekend will be a significant time for us all. All sectors will be affected by this historic economic and political move; and with only a month to go, none of us really know to what extent. As a UK based arts charity, we face an uncertain future not only when it comes to funding bodies, but also with the artists we engage with. More than 40% of the theatre companies and artists we’ve mentored, supported, commissioned and programmed over the past three years were UK based migrants. If Brexit means that these artists can no longer have a UK base, or even worse - if they don’t feel welcome or safe in the UK, it would be a devastating loss for us and the entire UK arts community.”

The festival will open on 27th March with a night of Music Without Borders, a night of music and folklore, highlighting artists from Italy, The Balkans, Poland and more who have made London their home.

Artistic Director of Theatre Deli, Jess Brewster adds: “With the Great British F*ck Off we will celebrate the talent and contribution of European artists, comedians and musicians, in addition to groundbreaking dance and theatre performances examining politics and mental health, and power of the people’s vote. Whatever happens after this Brexit weekend, Theatre Deli has always been an open and welcoming space to all, regardless of language or nationality - and it will continue to be so.”