Not surreal enough? British surrealism is a centuries old tradition 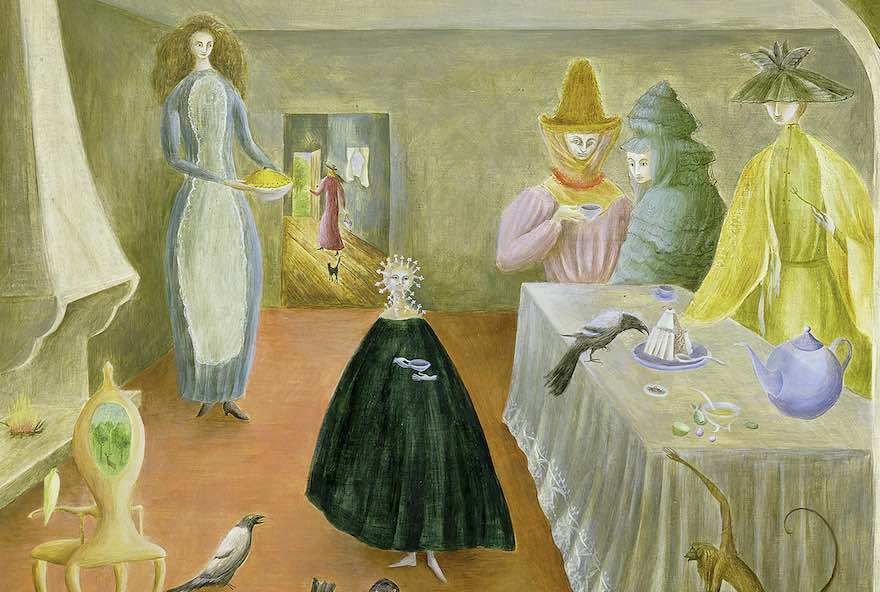 The Dulwich Picture Gallery’s fascinating new exhibition titled “British Surrealism” courts the viewer through an extensive collection of artworks, showing many that predate the accepted Surrealism era. Coursing back centuries, it suggests the British psyche has been long adept at contemplating a certain otherness.

Curated by Dr David Boyd Haycock, the aim is to introduce the origins and motivation of the British surrealist movement, whilst analysing the true concept of it throughout its’ history.

Surrealism itself predates 1920, when French writer, André Breton, gave the movement its name. The group defined surrealism by an exploration of dreams, automatic writing and drawing, all as ways of exploring the subconscious using techniques initiated by the psychologist Sigmund Freud. Other themes within the surrealist genre include politics, sex, desire and war.

The exhibition focuses in particular on British Surrealism as described in the title. Over 70 pieces of artwork are exhibited by 42 artists ranging from the year 1783 until 1952. The show itself exhibits works by Blake, Lewis Carol, and also suggests that Shakespeare himself showed surrealist tendencies. 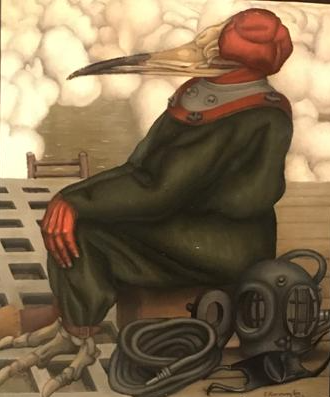 The theme in the first rooms is the exploration of dreams. The painting by Edith Rimmington, called “The Oneiroscopist” meaning interpretations of dreams, examines chance and the unexpected. The birdman in the picture wearing his frogman suit with helmet cast aside indicates how sinking into ones subconscious is unimaginable.

John Armstrong’s painting, “Heaviness of Sleep”, depicts a figure set in rock with obscured vision and references to sexual dreams where flowers protrude from a gash in the rock. These kinds of images were created in the psychologically tumultuous 20 century when the atrocities of WWI and the rise of fascism were already shaping the inner worlds of many Europeans. 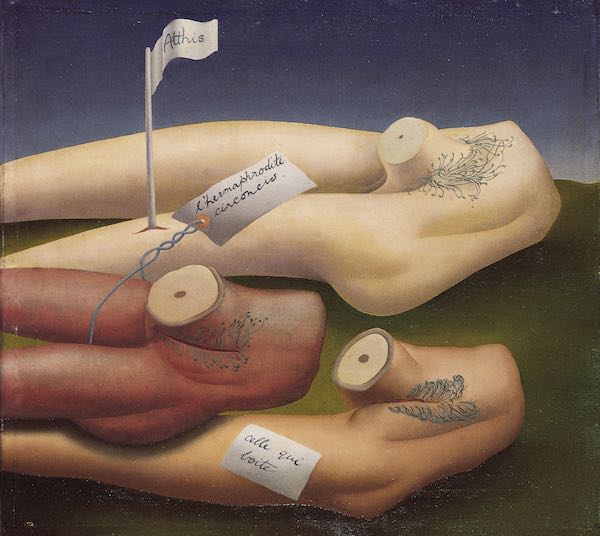 The paintings of female surrealist artists including Leonora Carrington, Ithell Colquhoun, or Grace Pailthorpe’s, attempted to break down the stereotypes of women in the society. Surrealists set out to transgress boundaries in sexuality and society at large.

Leonora Carrington draws attention in her painting of “The Old Maids” to feminist depictions of power, unity and even alchemy and witchcraft. Traditional depictions of female figures are removed from this setting as the viewer is presented with another social reality altogether.

The show ends in the final room on the topic of disorderly, inconsistent and truly unbound imagination, the very base of the Surrealism. You can find a rare work by Francis Bacon here called “Figures in Garden” that predates his later familiar style of disfiguration. Bacon was one of a number of artists ejected from the movement by Breton for “being insufficiently surreal”. There were others including Dali and Lucien Freud who regarded themselves as surrealists for a short time.

Embedding a sense of surrealist play in the DPG collection

A couple of Surrealist paintings are hidden amongst the classic collection at the DPG to encourage an interplay and dialogue between orderly and disorderly. They are worth locating in the context of the permanent collection.

Francis Bacon once said that “all Spaniard’s are surrealists” but contemplating this exhibition and thinking about the British openness to suggestion, interpretation and psychoanalysis, there is certainly a good argument for saying that the British too are inclined towards surrealism.

The exhibition is on from 26th of February until 17th of May 2020. Don’t forget to look up various events complimenting the exhibition on https://www.dulwichpicturegallery.org.uk/whats-on/