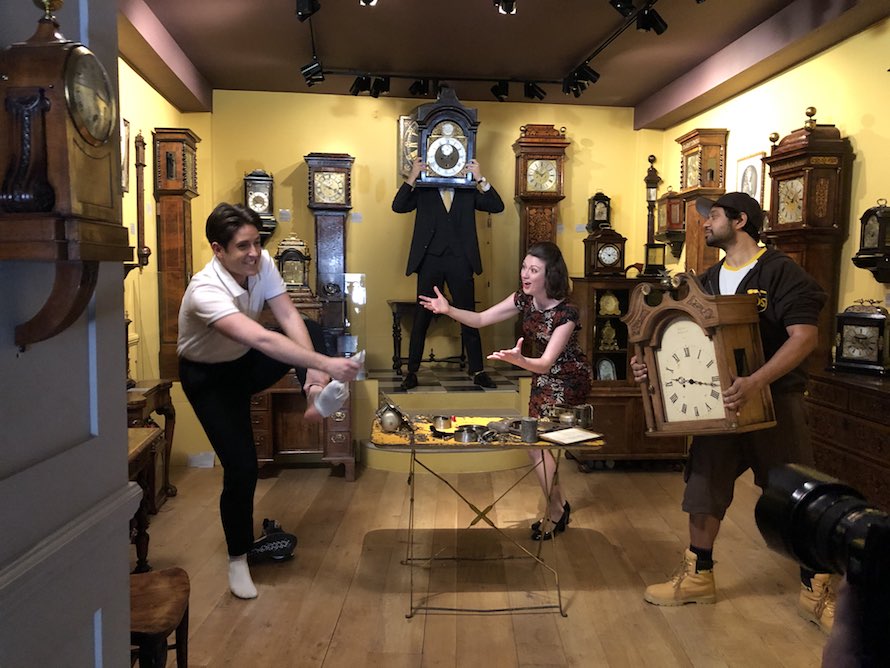 L’heure espagnole is the 51st new online, free to view event presented by Grange Park Opera in past 12-months

With live theatre performances still severely restricted by Covid-19, Grange Park Opera, Surrey is continuing to bring stimulating and uplifting musical performances to people in their own homes, for absolutely free.

The company has filmed an exciting and witty reboot of Maurice Ravel’s ‘opera comique’ L’heure espagnole about an unwitting clockmaker and his rather flighty wife, who experiences romantic complications one afternoon, while her husband is out on municipal business. 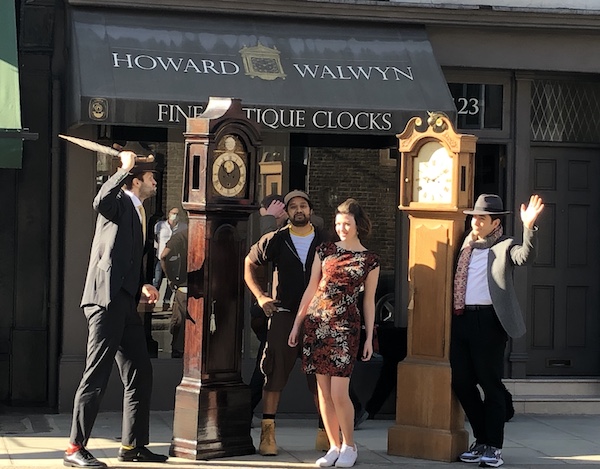 Concepción plans for illicit pleasure go awry with the arrival of Ramiro (baritone Ross Ramgobin) a UPS delivery driver (a mule-driver in the original story), who wants his watch, a family heirloom, fixed. The traditional UPS uniform has been specially shipped from the USA to appear the film…

It is the powerful banker Don Inigo (Ashley Riches) who used his influence to get Torquemada the municipal clock role, in order that he might seduce Concepción.

Through 21 comic vignettes the tension mounts as Concepción juggles Inigo, Gonsalve, and Ramiro. She shoves them into grandfather clocks to conceal one from the other.

The Grange Park Opera production is directed by Stephen Medcalf – explains how he came to film the opera in a Kensington shop: “I find myself with a setting infinitely more beautiful than anything that could be created on stage with the added extra of the vibrant life of Kensington Church Street. When we film towards the street, there is a moving backdrop of buses, lorries, dog-walkers, cyclists, joggers, toddlers: all of human life.”

The soundtrack for L’heure espagnole was recorded at London’s Wigmore Hall. During filming, this audio soundtrack is played back, while the singers mime to their own recording.

Grange Park Opera CEO Wasfi Kani says: “When the third lockdown was introduced, we knew from previous experience that there was a great need and demand for original, stimulating and uplifting music, while talented professional singers and musicians, plus technicians and engineers, also need to keep performing and working. So, we decided to continue with creating new events and employing artists. Since the start of the first lockdown, Grange Park Opera has created 51 new performances – something we are all hugely proud of.”

L’heure espagnole will be available to enjoy from 20 March completely for free, at www.grangeparkopera.co.uk

Grange Park Opera was founded in 1998 by Wasfi Kani, OBE. Since then, it has performed to over 300,000 people with more than 75 productions and 450 performances, during the course of 22 festivals. Productions take place at the Theatre in the Woods, a five-tiered, 700-seat opera house on the estate of the 14th century West Horsley Place, which was inherited by Bamber Gascoigne from his aunt, the Duchess of Roxburghe. The £11.5m cost of the building was raised by Kani herself from private donations in just one year.

Wasfi Kani CBE, CEO Grange Park Opera, was born in 1956 in Cable Street in London’s East End, and is almost certainly the only opera impresario who spent her childhood in a house with an outside lavatory. A violinist, she played for the National Youth Orchestra and went on to study music at St Hilda’s College, Oxford. After 10 years in the city, programming and designing financial computer systems, she started a small computer consultancy which gave her the flexibility to spend more time conducting. By 1993, she had made music her full-time career. In 1992, Wasfi was made Chief Executive of Garsington Opera in Oxford. In 1998, Kani founded her own opera company, Grange Park Opera, which in 2016 moved to West Horsley Place. Wasfi Kani is an Honorary Fellow of the RIBA and St Hilda’s College, Oxford. In the New Year’s Honours 2002, she received an OBE for her work in bringing her second opera company, Pimlico Opera, into prisons. In January 2021, she received a CBE for services to Music.