I can see why this has won an International Wine silver medal - it’s quaffing delicious! 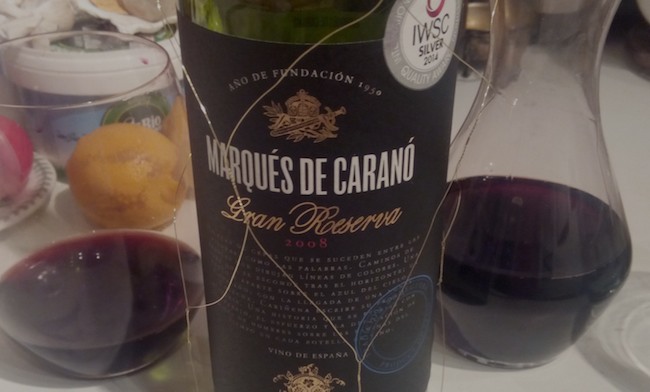 A nose of ripe cherries and hints of gentle vanilla from the oak. To drink it has more of those ripe fruits, soft tannins, rounded with age and nice balance that make it simple and fun.

The wine is from the little known Carinena, lavished with sunshine like hot kisses that transpire into really easy drinking wine that will make even your most tiresome over chatty friends seem interesting (especially at Christmas when they turn up in spades!).

Tesco have come up with a wine treat here offering great value at £4.99 - buy a case while stocks last.

Whilst it is fair to say that services in Dulwich do seem to be slowly cutting back, one particular situation that is really worsening is the sabotage of rubbish on collection day everywhere. This is an issue that has serious health implications. Where waste food and other bits are spread around, we cannot expect the bin collection teams to start picking individual bits up off the street. Add a comment 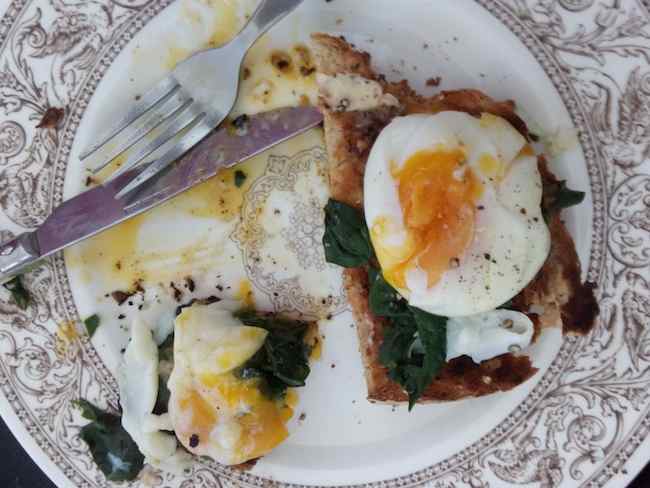 We’ve been scouring SE London for decent eggs and have recently hit upon a top tip that you may have overlooked. As with so much fresh produce these days finding tasty food at good value prices is becoming an ever increasing challenge. If it’s not good tasting veg, healthy meat, fresh fish, or even eggs that fling us back to our childhood days of dipping soldiers in yolk… getting the inside tip is what its all about. Add a comment

Chateau des Jacqes 2010 is a the hot tip on my lips right now. 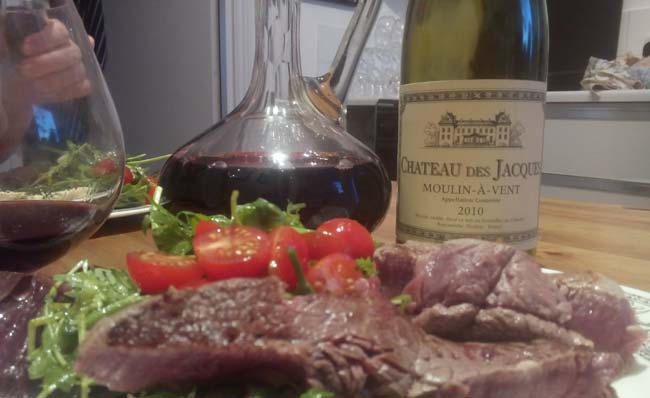 This is the season for warm complex seductive wines and this has all that charm and more. Based in the area of Moulin-à-Vent (named after a windmill!), the region is known for richer wines with a more Burgundian style. It’s not hard to be misled here. The wine has farmyard notes and an unmistakable cherry and plum aroma. The tannin is smooth but present enough to serve with all kinds of gamy meats. I actually had this with a very rare fillet steak and oily salad and was in heaven.

The best bit is that it is an absolute bargain at £15.99 form Sainsbury’s. I would have priced this at around £22-25 myself. Get one bottle, or two…. darn it, get a case in to steady the descent to Christmas!

Wilfred Owen is the most celebrated of the "war poets" and his work captures the tragedy of war, stripped from glamour and propaganda. One hundred years on, humanity still has much to listen to in the torturous words of these young men, breaking down in mental and physical agony to defend the values of their society.

Dulce Et Decorum Est is the first line of a popular phrase used at the beginning of World War I that translates as "It is sweet and right". The second part of the phrase, "Pro patria mori." means, "to die for your country."

It's that time of year when warm filling and undeniably tasty meals are the idel dreams of chilly days. Aubergine is both versatile and delicious so why not try this recipe. Add a comment

Depiction of our not-so-distant future are looking pretty beak... should we take them seriously? 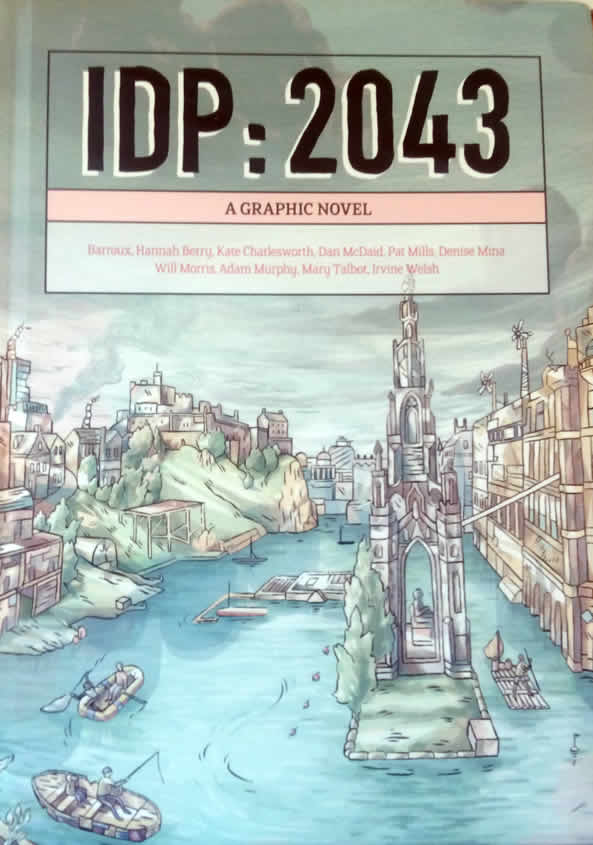 Fiction is, by its' own definition, dredged from the recesses of the imagination, but our identification with it usually implies some kind of connecting cord to or from the real world. In the “Cli-FI” genre (shortened from “Climate-Fiction”), authors are increasingly depicting the world as it might be towards the end of the century, or perhaps even a decade or two away. Needless to say, the depictions are seldom desirable, but are these storytellers reflecting an unnecessary internal pessimism, or are they derived from visible seeds of decay, visible now in our current existence?

Having spoken to many scientists about their findings on climate change I am intrigued by the often appended line to the dialogue that goes something like, “…but I am an optimist and I am confident humanity will make the necessary changes before it is too late.” Of course, the trouble is, instead of slowly turning the carbon effluent monster of human civilisation around towards a sustainable future, the rate of consumption, and thus pollution, is actually going up.

Corporations have taken over our democracies, assuming the status of living entities (extremely wealthy entities), and proceeded in buying up vast quantities of the natural world, before converting it into carbon pollution and wasteland. Conflict among humans and the number of failed states is rising. The amount of food being produced is required to go up to feed our burgeoning populations but it can only go down due to pressure from climate change and poor use of land. Corporations are manipulating seeds, patenting them and desecrating the future potential for organic agriculture. Water is running to all time lows as fossil acquirers that supply much of China, India and other regions are drying up. Huge food baskets like California is collapsing to drought. The Ukraine is being destroyed by war. The list goes on and with it the hopes for a stable, secure and plentiful future  diminish.

It is hard to comprehend the reality of all this when one lives in a wealthy western culture like the UK (where I am), and the supermarket shelves are stacked with plentiful supplies of everything and anything. Stalls on the street are bursting with colourful fruit and veg, whilst restaurants and coffee shops are everywhere. The UK imports around 40% of its produce, a figure likely to rise as the government offers up more agricultural land to housing developments. The impacts on food prices from a range of impacts, largely all with a root cause of climate pressure, will be a steady rise with some shocks along the way. Conflict around the world will continue to rise and be exacerbated by these issues. We in the west may feel safe from harm now but the seeds of dystopia are most definitely being sown around us.

In this graphic Cli-Fi novel, titled IDP-2043 (IDP standing for Internally Displaced Person/’s), a number of distinguished writers and graphic artists have contributed to one flowing storyline. Perhaps the most recognisable name in the list is Irvine Welsh but this is very much a collaborative effort and each contributor makes a mark. The story extrapolates out all the trends of our current course, starting with massive sea level rise that leaves the UK about half its current size in area. The government is largely a corporate dictatorship ruling with fear and hardship, with dark plans to save it self. 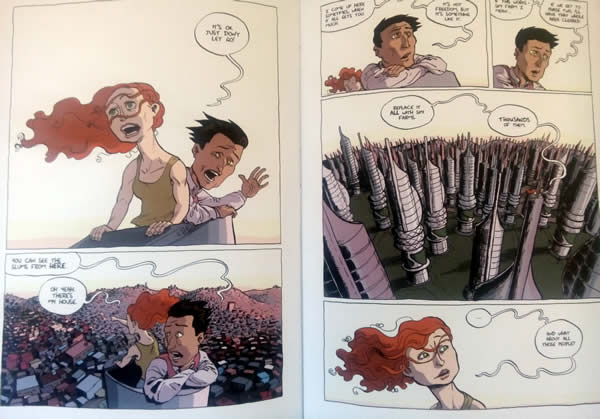 The lead character in the story is a woman from the ghetto who’s growing celebrity and outspokenness is causing problems for her superiors. Even the hit men sent to execute her have some logic to their own psychotic disposition as they lament the burden of human population. The unfolding story is fast paced and makes for good entertainment. It would be great to see many more of these stories being published with strong links to the challenges that we can see in our own societies. For instance, the restriction of education and fairness, and the subjugation of democracy for corporate power, in order than money can continue to flow into the hands of those who least deserve it.

The narrative points to one conclusion, which humanity should try to grasp sooner rather than later. True value does not reside in the blind acquisition of inanimate objects. True value will always be in the balance of human life with nature, the ability to feed to satiety, to sup water when thirsty, to remain warm when outside it is cold (and vice versa), to be stimulated intellectually and to live our lives with respect for the social dynamics of our society, as much as for the individual private worlds which we inhabit.

Cli-Fi is a growing genre and this graphic novel is a worthy contribution, beautifully packaged with its own troupe of talented storytellers to lose oneself in. It is available to order online from Freight Books: http://www.freightbooks.co.uk/idp-2043.html

Gorgeous wine at gorgeous value weighing in at around £7... something from Oddbins on Rosendale Road. 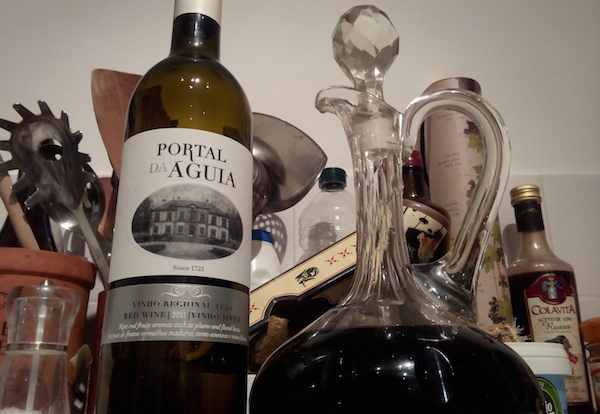 It’s uncomplicated with spicy and earthy fruits like damsons and plum. Fading summer fruits add a little nostalgia to the experience. It has a couple of years age, which in our opinion counts for something.

At this price there is no need to be precious; have fun, nibble cheeses, explore roasted dishes and herbaceous vistas. The main thing… get involved.

Portugal has value and choice coming out of her ears… it is our duty to know more!